This section contains information on how promotions are applied. List prices and sale prices for products are stored in the Pricing and support multiple price tiers so that higher quantities can be purchased at a discount. These prices can be discounted dynamically using rules defined for the promotion rules engine. 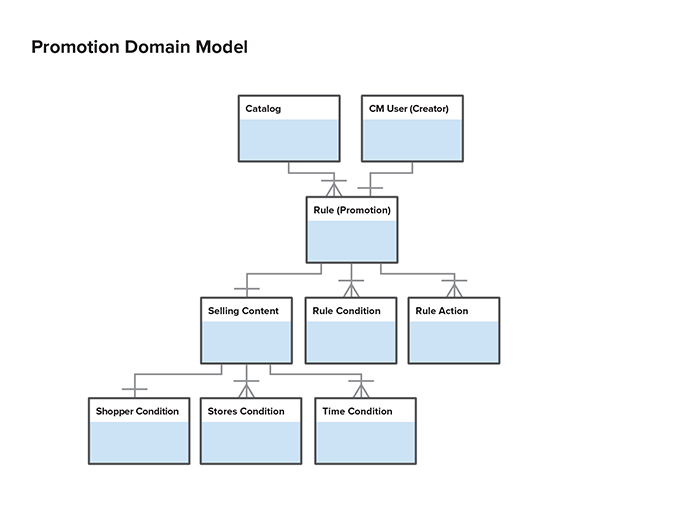 The promotion rule engine allows marketers to create promotions that customers will see in the store.

The promotion rule engine is built on JBoss Rules (formerly Drools Rules). JBoss Rules is a third-party rules engine that uses a fast algorithm to evaluate rule conditions and execute their actions. The input to the JBoss Rules engine is a set of objects used in the condition evaluation and action execution as well as the set of rules, which we express as text in the proprietary Drools language.

JBoss rules supports basic evaluation of objects’ properties within the engine itself. However, more complex operations are not supported. In Elastic Path, nearly all conditions are evaluated in Java and the actions are also executed in Java. This allows the condition and action code to be easily debugged and unit tested. The PromotionRuleDelegate is the class that is responsible for computing conditions and executing actions as required by JBoss Rules.

Components of a promotion

Before Elastic Path 6.2.1, there was a third type of rule element: eligibility. This was replaced by the shopper segment, which is determined by evaluating information stored in the shopper’s tag set. The PROMOTIONS_SHOPPER tag dictionary represents tags that relate to shoppers. For more information on customer segmentation and the tagging framework, see the tagging framework section.

The Commerce Manager promotion editor allows the user to compose rules from rule elements and then save those rules in the database. The system then retrieves the rules from the database as object graphs, requests the corresponding Drools code from the rule objects, and passes the rule code to the JBoss Rules engine. JBoss Rules will then determine which rules’ actions should be executed on the Java objects that are passed to it.

There are two types of promotions:

These promotions are applied when looking up product prices, for example, while the shopper is browsing the product catalog or viewing product details. This promotion type supports relatively simple rules, such as x% off a product or category.

All catalog promotions are applied simultaneously. The conditions are checked at the same time and then discounts are applied. In cases where multiple discounts apply to the same item, the lowest discounted price always wins.

These promotions are only applied when the shopper is viewing items in their shopping cart. This promotion type supports more complex rules, usually requiring awareness of the combinations of items in the cart.

The key classes that represent rules in the domain model are:

These domain objects generate the Drools code that is executed by the rule engine. The rule domain objects are also responsible for self validation. The validation and code generation is invoked by clients at the top level (Rule Set) and propagated down to the child objects.

Other key classes include:

The rules objects generate Drools code such as the example below:

Rules are composed of rule elements, which can be conditions or actions. To add a new rule element:

Compiled rules stored in the database are no longer valid after upgrading to a newer release of Elastic Path. They are also invalidated if existing code is changed due to serialization, since the precompiled classes themselves are stored. In both cases, you need to drop all rows in the TRULESTORAGE table.

Rules are extensively tested by JUnit at several levels. The following kinds of JUnit tests are most frequently added or extended when extending the rules system:

Once the rule system has successfully executed the unit tests, rules can be tested in the Commerce Manager and Cortex Studio. For information on setting up the system for easier rule testing, see the Configuration section.

To assist with troubleshooting rules engine failures, the Drools code generated by the rules domain objects can be logged in the log or console.

The set of rules to be passed to JBoss Rules is loaded at start time and cached by the EpRuleEngineImpl. EpRuleEngine.compileRuleBase() is invoked periodically by a Quartz scheduled job to reload rules from the database.

The promotion rulebase can be configured to rebuild periodically. Scheduling and configuration can be found under the search server’s Scheduled Jobs (Search Server). This means that rules will be reloaded from the database and compiled into the input format for JBoss Rules. This rule compilation operation is expensive and should not be performed more frequently than every 5-10 seconds.

For rules to take effect immediately after rulebase compilation, it is necessary to disable caching (Both the second-level cache and the product retrieval strategy defined in service.xml). This is useful for testing but disabling caching is not recommended for production environments.

The promotion rule editor can be extended to support additional rule elements such as conditions and actions.

How to add a new rule parameter

There are many ways that new rule parameters can be specified by the user. For example, some rule parameters may be well supported by free-form input while for other parameters the user should be prompted with a pre-set list of values. In other cases, it is desirable to open a dialog box to allow the user to select a parameter.