Apache Shiro is a role-based access control framework (RBAC). Shiro provides a dynamic security model where roles and permissions can be configured at run time.

Role Based Access Control works by restricting the CRUD (Create Read Update Delete) operations logged in users can perform on Cortex resources. Depending on a user’s role, they may only have permission to view (Read) a resource, or they may be able to insert (Create), update, or delete data through a resource.

When Cortex receives a request with an access token, it generates a Subject object. The subject represents the user’s log in state and contains a list of operations the user is authorized to perform.

Each Cortex Bundle must contain a permission.properties file. This file defines rules that Apache Shiro follows to determine whether the logged in user is allowed to perform the requested HTTP operation. If the operation is not allowed, Cortex will return a 401 Unauthorized response.

The \ character at the end of some of the lines above indicate that the line continues and a break has been added for readability.

Each line can be broken down as follows:

The sections below describe each of these parts.

Each Cortex API request is assigned a single Elastic Path role. An Elastic Path role is expanded into a collection of Shiro roles at runtime. A Shiro role is a granular access control that conveys a right to perform a particular business function.

Cortex determines the effective role for each request as follows:

The process above is also shown in the following activity diagram: 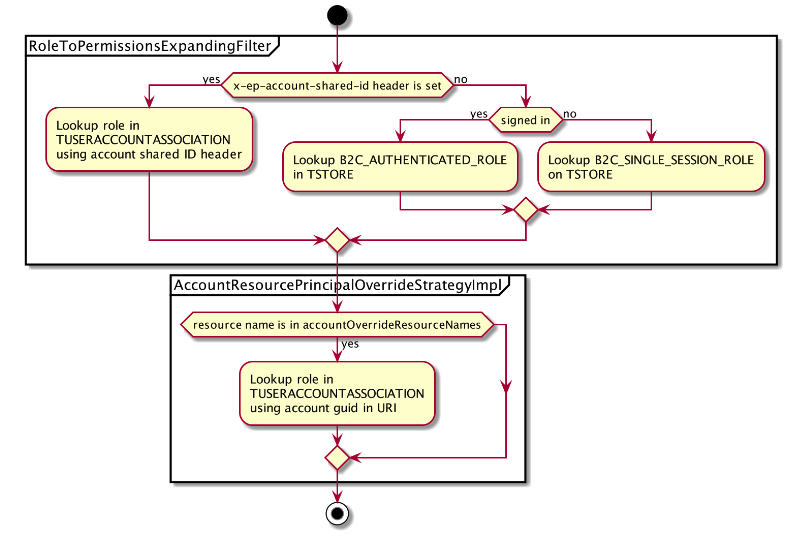 Out of the box, Cortex supports the following Elastic Path roles:

The following table shows the Shiro roles that are assigned to each Elastic Path role by default:

To customize the Elastic Path roles or the assigned Shiro Roles, update the roleToPermissionsMap in the commerce-engine/core/ep-core/src/main/resources/spring/service/service.xml file.

When defining a permission.properties file, each Shiro role needs to be prefixed with 'relos.role.'. Any role defined without this prefix is ignored.

All users always have the PUBLIC and OWNER Shiro Roles. OWNER has no real purpose. The restrictions that ensure that users can only access resources they "own" are actually enforced by parameter strategies, which we will talk about later.

Avoid defining permission.properties files with relos.role.OWNER. Use relos.role.PUBLIC instead if all users should be able to perform the operation.

Assume that a user ends up with the CATALOG_BROWSER Elastic Path Role. This is expanded to the following Shiro Roles:

Now assume that our bundle permission.properties file looks like this:

Our user will be able to perform all of the OPERATIONS for the specified URI_PATTERNS for PUBLIC and OWNER, but not READ_CUSTOM_CARTS or MODIFY_CARTS.

Operations define what type of request is being enforced. Cortex supports three different classes of operations: standard, advisors, and special.

These operations control whether certain HTTP verbs are permitted.

These operations control whether the onAdvise method of Advisor classes are invoked to return messages.

The URI_PATTERNS advisor operations start with the resource name, unlike all other operations. Usually they are just defined with a wildcard, as in this example:

URI patterns are pattern matchers on the URI being accessed.

The URI patterns only match on the path after the base URI (i.e. http://studio.elasticpath.com/cortex/) and bundle name (i.e. carts).

For example, if a client accesses http://studio.elasticpath.com/cortex/carts/mobee/grsdim3cgfrwcljvme3taljugu4tqllbgqydkljwhbrtoyjrgbstgobzga=/items/mobee/qgqvhklbnruwk3s7onvxk=/form, only the mobee/grsdim3cgfrwcljvme3taljugu4tqllbgqydkljwhbrtoyjrgbstgobzga=/items/mobee/qgqvhklbnruwk3s7onvxk=/form portion is considered by the URI pattern matcher.

Parameter strategies are usually used to ensure that users can only access resources that they "own". For example, the carts.cart-id parameter restricts a user’s permissions so they only apply to the user’s own carts.

Out of the box, Cortex supports the following permission parameters. These are exclusive to a resource:

The following parameters are available for all resources:

In addition to the parameter strategies described above, URI patterns can contain the following:

Assigning Multiple Permissions to a Role

Role permissions are defined on a single line. To assign multiple role operations and URI patterns, structure your permission assignment as shown:

To support the ability to configure your resource’s roles and permissions during runtime, modify your resource’s src/main/resources/spring/applicationContext-resource-server.xml:

Permission parameters are configured in a Helix resource by extending the AbstractHelixModule class, and binding PermissionParameterStrategy to the class.

The following steps show how to add a permissionParameterResolver to your custom resource:

Out of the box,Cortex has the following parameter types and strategies:

Modifying the Roles and Permissions of an Existing Resource

Cortex resources have predefined roles and permissions. Configure an existing resource’s permissions by defining new permissions in a <Family_Name>RolePermissions.config file. Permissions take effect without having to restart Cortex.

After creating your <Family_Name>RolePermissions.config file, you can modify your resource’s permissions through the Apache Felix Web Console.

Without a <Family_Name>RolePermissions.config file, you cannot modify your resource’s role permissions through the Felix Web Console.

To configure your permissions through the Felix Web Console:

Permissions save to the <Family_Name>RolePermissions.config file will take effect immediately.