When importing data into an Elastic Path deployment, there is the possibility of conflicts. If an object being imported has the same ID as an object in the target deployment, you need to indicate which one you want to keep. You can configure how the Import-Export tool resolves conflicts by specifying import strategies. You can also configure how dependencies of those objects are handled in the event of conflicts.

For example, the following diagram shows an Elastic Path deployment that contains two categories, A and B. Category A contains one product, product X.

The package being imported contains categories A and B, and a new category named C. It also contains a new product, product Y, which is associated with category B. 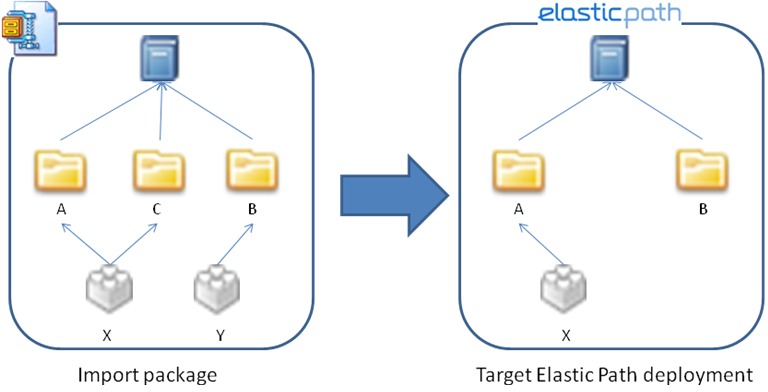 If the Insert import strategy is selected, category C and product Y are imported into Elastic Path. Category A, Category B, and Product X remain unchanged. (The stars indicate objects that have been updated after the import.) If the Insert or Update strategy is used, all the objects are imported. The existing objects are overwritten with the versions in the import package. This flexibility can be useful in some situations, but it can also cause problems. As an example, assume that catalogs are set to use Update and products are set to use Insert or Update. If the import package contains a new catalog and new products associated with that catalog, the following will occur when you import the package:

To prevent problems like this, do not use Update for catalog or category object types if any object types below them in the hierarchy are using Update or Insert or Update.

In addition to specifying conflict resolution, you can configure how to handle dependencies of those objects when there are conflicts. A dependency conflict occurs when an object exists in both the import package and the target system and each version has different dependencies.

There are two options for handling dependency conflicts: If the Clear collection option is selected, the existing dependencies are removed. The net effect of this is that product attribute A is removed, F is added, and any changes made to the other product attributes are applied.